From the start Schnitzer West, LLC based their business on rethinking property development and management from a tenants’ perspective, and it worked. Schnitzer West is now one of the leading real estate developers & managers on the West Coast. It’s no surprise a company like Schnitzer West turned to F5’s BIG-IP® technology to offer that same forward thinking to their internal clients.

Schnitzer West’s network is comprised of two data centers with about 10 branch offices. Users in the branch offices work from home at times, and depend on the now legacy F5® Firepass. The Firepass was located in one of the two data centers, and provided VPN, Application Portals, and RDP access to the remote workers. The firepass has been rock solid over the years, but has been end of sale for some time and is creeping up on end of support & RMA. During an infrastructure review it was clear Schnitzer West was in need of a F5 Firepass migration, but what technology should replace it? Making the decision to stick with F5 was an easy choice for Schnitzer;

“From our research, F5 offers the best and most complete application delivery solution out there – their technology future proofs our environment. With the new F5 BIG-IP we’ll be able to do a lot more than we did with the Firepass. We’ll be able to load balance locally and globally, offer web security, vpn, portals, and identity management all in one device.” – – Schnitzer West

Given the opportunity to refresh, Schnitzer West wanted to make their environment more resilient to failures and “location aware”. They host applications in two data centers, but the old firepass was single homed in only one of the data centers. Aside from being susceptible to site outages, the single location firepass also forced any external users who needed to access application in the data center without the firepass to run over a VPN connection to the second data center.

A highly available setup where external users were protected against a site failure and directed to a site based on application location was ideal. Schnitzer West didn’t know if this was possible, until we started discussing what F5 has been up to with the BIG-IP APM® module.

“We didn’t know we could use one URL and direct users based on the applications they use and availability – all with no manual intervention. But WorldTech IT made it happen with F5’s technology. “

WorldTech IT designed a solution around F5’s BIG-IP Local Traffic Manager™ (LTM®), Application Policy Manager (APM), and the Global Traffic Manager™ (GTM™ – now known as DNS), deploying the new F5 BIG-IP’s in both data centers. The client was happy to learn F5 offers a Virtual Edition of the F5 BIG-IP. This allowed Schnitzer to deploy their solution quickly as a Virtual Machine, while utilizing hypervisor hardware they already owned. The F5 Virtual Edition platform also gave Schnitzer West the flexibility to scale, as it’s a simple license upgrade to add more bandwidth or modules.

The BIG-IP platform also gave Schnitzer West the ability to scale. They didn’t have the need for a Web Application Firewall (WAF), or a traditional portbased firewall, but in the future when they do – it’s just a license upgrade to enable the ASM® or AFM™ on the BIG-IP.

The Firepass was located in a single Corporate on-premise location and provided the following features:

Major pain-points discovered by WorldTech IT during the requirements gathering phase included:

Two Active-Active locations required the use of the F5 DNS/GTM (Global Traffic Manager) module to distribute DNS requests between the two sites, while providing persistence. Unfortunately, purchasing the F5 DNS/GTM add-on license was out of budget. Fortunately, WorldTech IT offers a SaaS Global Load Balancing Solution powered by the F5 DNS/GTM, for situations just like this.

To alleviate the second issue, WorldTech IT moved authentication of all remote users to their Active Directory database – where it belongs – away from the local database that was on the legacy F5 Firepass. To achieve the user and OU-based entitlement mapping, the Firepass requires that you manage individual user IDs within its’ database—it doesn’t have the ability to query Windows AD for a user’s entitlements. Fortunately, the F5 BIG-IP APM (Access Policy Manager) can query for user’s entitlements from AD without the cumbersome effort of managing users in two locations. As you would imagine, Schnitzer West was excited to relieve themselves of managing users in two locations. The old way required constant updates to Firepass whenever users joined, departed and re-joined from the company, in addition to updating their centralized AD user database.

The 3rd and fourth issues was the tricky part

To ensure users take the optimal path to applications and their physical Desktops over the Internet, they required the following user work-location based routing logic:

The client organizes their users within Active Directory (AD) using AD Organization Units by office building. The diagram below illustrates the traffic flow of a user that happens to login to the APM Webtop within the second data center, but their OU contains a building location whose optimal path is via the data center one. To achieve this on-the-fly routing, WorldTech IT setup each BIG-IP as both a SAML Identity Provider (iDP) and Service Provider (SP), with iDP initiated connections. 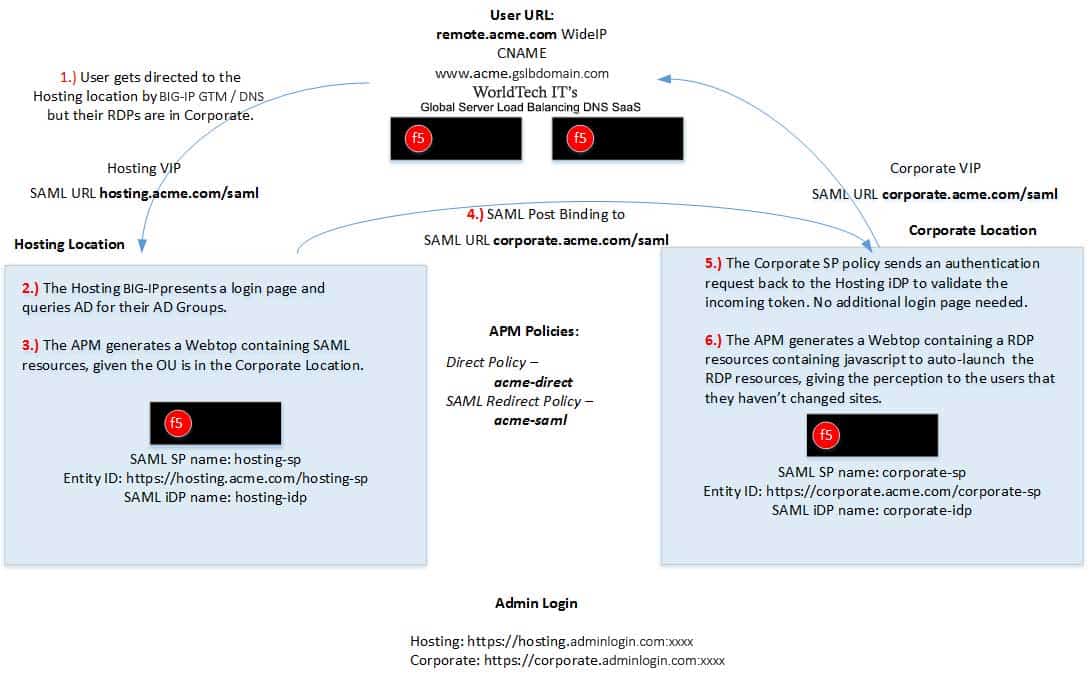 For users arriving at the data center one initially, they are presented with the exact same login page and webtop from a branding and page formatting perspective, so they are unaware there are two sites involved. Given the requirement for Network Access VPN resource to go through the second data center, users will be presented with a SAML resource icon that will direct them to the second data center. The VPN resource will auto-launch due to the auto-launch APM setting. Whereas, in the case of RDP, Javascript is required to auto-launch the RDP resource within the same tab, making the redirection seamless from the client’s perspective. The user will be unaware that the resource is opened from the remote site instead of the one they logged into originally.

WorldTech IT provided the client the ability to provision up to 4 per user and 4 per building RDP remote desktop resources. To conditionally display an RDP or SAML resource depending on whether the attribute was populated or not in AD, and avoid displaying resources with empty links, WorldTech IT developed a custom Visual Policy Editor (VPE) Macro. The macro checks for the existence of the attribute in the user session variable and will only conditionally display RDPs based on the existence of user AD attributes.

You can use an Empty action to branch on the existence of the AD attribute session variables, with the Branch rules outlined below: 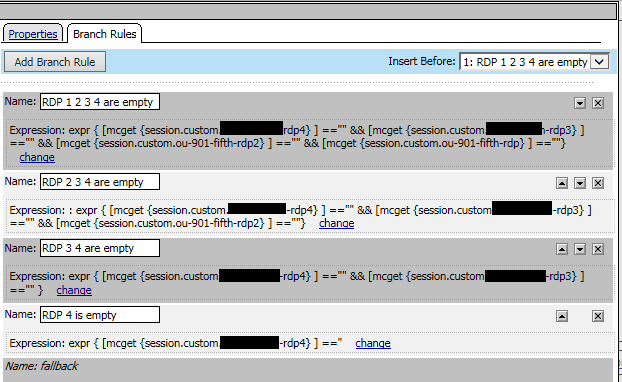 You can also use the Advanced resource assign Action to add the appropriate resource to the webtop.

We hope this case study shows you just how flexible the BIG-IP platform can be.